In chaotic scenes outside shuttered airport, hundreds of families gather as Taliban tries to disperse crowds.

Kabul, Afghanistan – For the last three days, Yasna Haqparast has been standing outside Kabul’s Hamid Karzai International Airport with her husband and two children.

Each day, as they wait by the divider between the airport and the Stars Wedding Hall, Haqparast and her family hear the sounds of gunfire as members of the Taliban shoot round after round into the air, trying to disperse the hundreds of families gathered outside the shuttered airport.

Haqparast and her family had fled the northern city of Mazar-i-Sharif, one of the last urban centres to fall to the Taliban last week, and were hoping to head to Canada on Sunday evening. When they got to the airport though, they found themselves face-to-face with a calamity.

“There were rushes of people, everyone pushing up against the other,” Haqparast said of the thousands of people who had crowded around the airport the night President Ashraf Ghani fled and the Taliban arrived in the capital, Kabul.

Sources told Al Jazeera that the airport has sustained serious damage that will require some time to repair. They said security scanners were broken as a result of the sea of people running past them, and that the inside of the international terminal and the gates are also in need of reparation.

It wasn’t just the people desperate to board commercial flights to Dubai and Istanbul, or private evacuation flights to the United States and the United Kingdom, that were amassing around the airport – there were also looters.

Fahim, a government worker who was trying to board a flight to Istanbul, said the impact of Ghani’s departure was immediate.

“As soon as they heard he left, everyone left their posts,” he said of people ranging from government ministers to police in the city, including near the airport. He said thieves took advantage of the chaos and insecurity.

“They would steal the luggage from your hands,” both Fahim and Haqparast said. 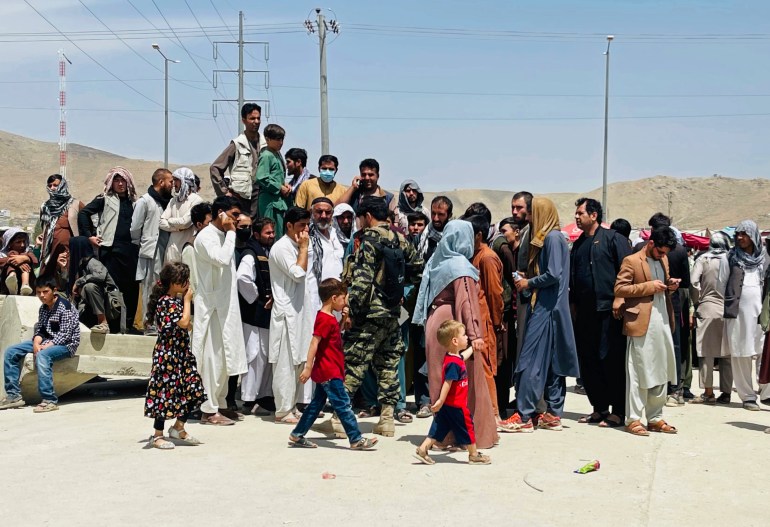 Hundreds of people gather outside the international airport in Kabul, Afghanistan to flee the country [AP Photo]

Haqparast said in the mad dash to manoeuvre through the crowds rushing through the many checkpoints and the thieves, people lost track of their belongings.

“We were running so fast that what didn’t get stolen somehow just fell from our hands and our pockets.”

She said that her family’s documents, passports and money all fell somewhere on concrete pathways leading to the international terminal.

But she said the worst part of the ordeal was seeing the horrific scenes that have gone viral on social media, including video footage that appeared to show young men grabbing ahold of a US military plane before plummeting as it ascends into the air.

PROMOTE YOUR WORKS WITH US

#FIXTHECOUNTRY GROUP TO EMBARK ON ANOTHER DEMO TODAY

mcbondgh - November 26, 2021 0
A Pressure Group, Fix the Country Movement are expected to hit the streets of Accra Friday 26th November 2021 in a demonstration that will end...

NIGERIAN NATIONAL, ONE OTHER FINED GH¢3,600 FOR TRYING TO OBTAIN GHANA...

QWIKLOAN TO CEASE OPERATIONS IF E-LEVY IS IMPLEMENTED – AFB GHANA

DO BUSINESS WITH US.